Survey reveals the worrying online habits of our children

Quantitative research I carried out over the last 6 months of 2013, with children from the age of 9 years old to 18 in Irish schools was covered by the Irish Independent on 3rd June 2013 with the same title as this article. Article was put together by Greg Harkin, leading journalist with Irish Independent who has reported massive amount of information regarding Cyber-bullying over the last few years.

Something that came up in our research, was entirely worrying for some parents, was the fact that the children are looking at Twitter as the “New Facebook” and Facebook is “Yesterday’s news”. Their was a drop of 6 % of children using Facebook, whilst their has been an increase of 15% amount of children on Twitter in the last 12 months. Globally Facebook are holding a membership of approx 1.1 billion users, with 2.2 million of those Irish. “751 million monthly active users who used Facebook mobile products as of March 31, 2013″, which shows majority of the users are accessing via their mobile phones. But the children are saying they are using Twitter more. Recent figures show that Twitter are holding 500 million users within their 140 character platform around the world. Children are using Twitter like a group SMS service and telling their followers as much as possible in the limit of 140 characters, which is avoiding their text cost on the phones low. They believe its easier to follow what people are doing in a quicker glance than trawling through Facebook’s Timeline. They maybe using Twitter more, but these figures show that they cannot let go off the grip Zuckerburg has on them, just yet. 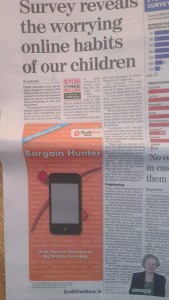 The no of Facebook friends people have on their profile have gone from average of 150 to 250. When asking children who their large groups of friends are they have hard time figuring out who really is their friends. Highest group of course is their friends in their peer groups, followed by family and then by people who see locally. In essence, this seems to be harmless and that the children are ok. But, are the people they see locally really their “friends”. This group is made up of adults mostly that the children recognise as having spoken to their parents or work in locations that the children would frequent. The drawback of the range of different adults on their friends list can be important when sharing information on a profile, as to who can see it really. Remember we too often leave digital footprints that can provide a great deal of information about our background, contact details, family, work and much more. To illustrate the dangers of posting online without thought can be seen in the below video

The long and short of the answer to Facebook settings for children is unsure, as many as 25% have a Public profile and 17% are unsure what their settings are. This is not only startling for the children when they are explained how the settings work, but also to parents worrying about what information their children reveal. Remember, if a home is broken into when away and your child alerts the digital world to the house being empty, what do you think the home insurance company will say to that????

When I talk to parents on the evening after a visit to the children, one of the most important aspects of my workshops is the children swallowing the privacy settings concern. Parents will tell me “I don’t know what you said to my child, but they changed something called “privacy settings after they came home!!”. To find privacy settings, after logging on to Facebook, click on the small gear wheel at the top right of the page and then click Privacy Settings and go through all settings and change from Public to your chosen audience.